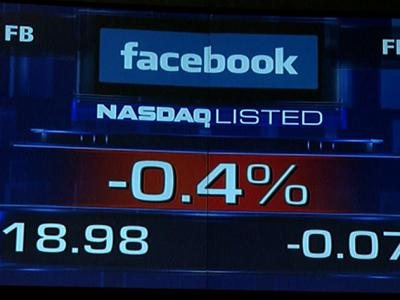 Facebook stock is down, but the future is looking up.

Let’s face it, the Facebook IPO was drastically overvalued.  Overly optimistic traders, corporate greed, a shift in members viewing Facebook on smart phones vs. PC’s (resulting in fewer advertising opportunities) are among the many reasons for a lower than expected IPO and corresponding current stock price. And while its revenues represent only 1% of the world’s $507 billion in total ad spending, the growth opportunities for Facebook are limitless.

It is not uncommon for a stock price to dip significantly after its IPO. Companies such as LinkedIn and Angie’s List experienced similar plunges. LinkedIn’s share price was $94.25 in their first day of trade after their IPO, yet plunged to $63.71 a month later. It currently trades at $105 a share. Angie’s List Inc., the consumer-reviews site, had a first-day close after the IPO value of $16.26, up 25 percent from IPO price. It dipped to $11.56 within the first month. Four months later the price was $18.89.

There are many examples of tech stocks which have performed well after initially dipping in price.  Google is currently trading at $675, compared to $84 since its 2004 IPO. Apple stock prices were at $22 dollars for its IPO back in December of 1980 – and increased 1700% within one year – and as of today are trading at a whopping $665 per share (over a 4000% increase). What is most important to recognize is not the short term expectations, but the long-term growth potential of this technology platform. There are three reasons Facebook is too big to fail:

1) Lifestyle Facebook is not just a software application, it is a way of life.

Individuals can find lost family members, old classmates, share pictures and events with friends and family, and chat live with other members. According to Mashable.com, the average person spends 5 hours and 46 minutes per month on Facebook, up from 4 hours and 39 minutes back in June of 2009.  This is more than Google, Yahoo, YouTube, Microsoft, Amazon and Wikipedia combined!

While there has been a shift in members viewing patterns on Facebook from personal computers to mobile phones (which have fewer ad opportunities due to a smaller screen), Facebook has barely scratched the surface of reaching out to other companies to partner with. Companies with large networks of people have the ability to exponentially grow the views and ad opportunities. The same untapped potential is true of 3rd party software applications that allow Facebook users to share content with online friends, and login with their existing Facebook logins.

The most significant accomplishment of Facebook is the statistical data they have compiled. Users fill out their age, physical location, interests, simply by signing up. Pages users view, topics they frequent, companies they visit, all are collected which allows Facebook to search for patterns that their advertising department can capitalize on. But even more than that, Microsoft, Facebook, and Amazon have all have teamed up to share demographics (meta-data) from one site to another. While in many cases the personal information or identity of a specific person cannot be revealed, those seeking to advertise now have a larger reach, and the most precise statistics ever available. As the number of technology partnerships increase, the value and advertising opportunities increase.

Like any other tool, technology can be used to build or to harm.  Other Social Medial platforms such as MySpace have gone by the wayside. This is not because they weren’t useful, but because their technology did not keep up with the changing needs and demands of their users. Facebook understands their users. They “get it”.  Improvement of existing features, incorporating new features such as Timeline which allow users to display more content (and allow for more advertising opportunities), a large R&D budget, and an untapped world market guarantee a long and profitable future.

Click here to contact GANZ Media today and find out how we can create a Social Media Campaign for you!